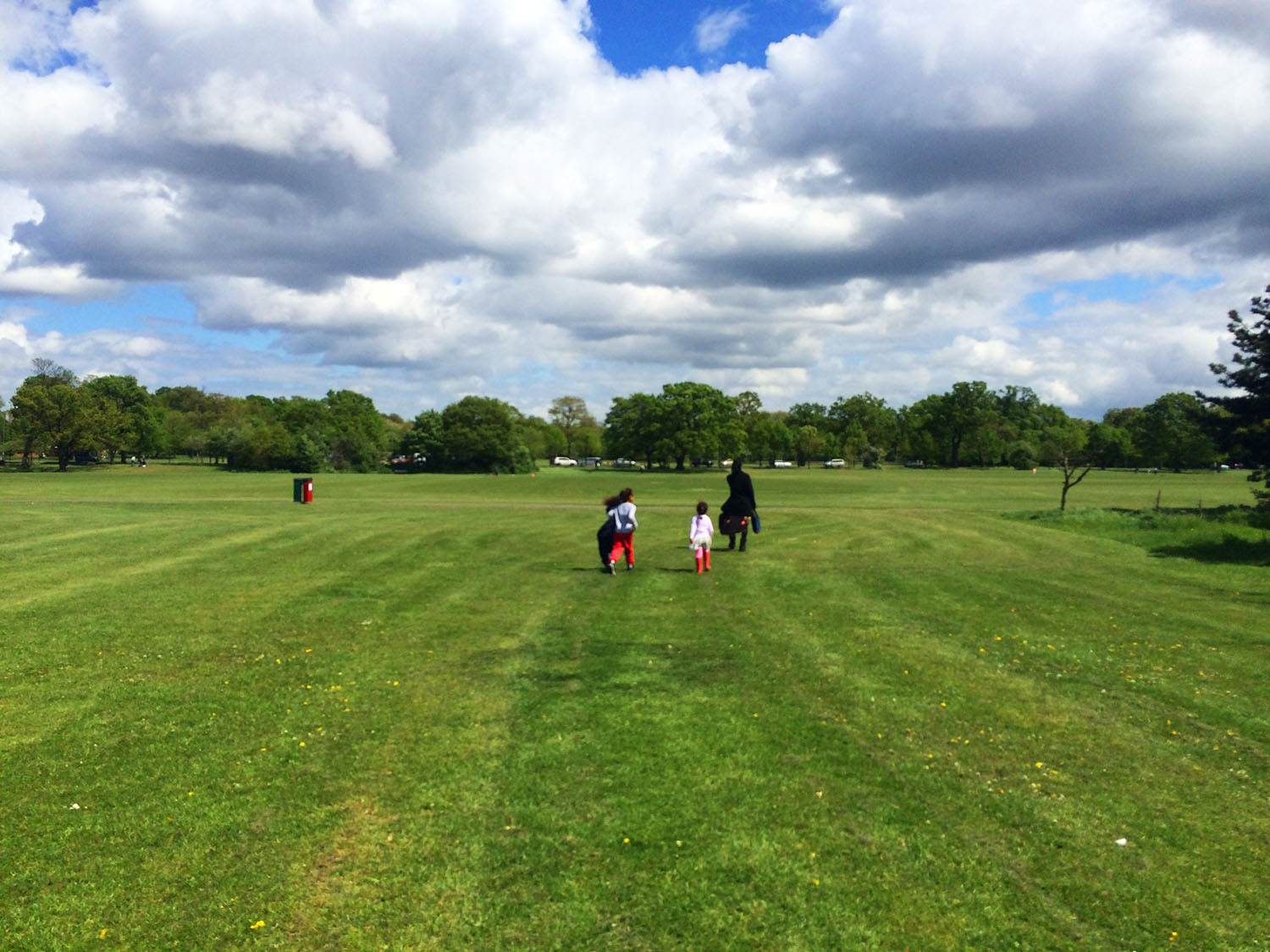 It started off grey and cloudy but soon turned into a glorious sunny day for the Tales of the Pied Piper Festival – a wonderful South London Storytelling event on Tooting Common.

I headed out early with the whole family so that we could join in the full array of activities – a steel pan band, fire eating, a parade, crafts and lots of storytelling. I was going to be storytelling ‘True Tales’ for the Festival near the end of the day.

First stop when we arrived was the Storytelling Tent where Storyteller Jamie Crawford was telling the tale of the Pied Piper.

I was really keen for my two girls to hear his tale, but they had other ideas!  They’d both spotted an ice-cream stand and that was all they could focus on. Determined not to miss the story, I guided them towards the Storytelling Tent with promises of ice-cream afterwards.  This was met with frowns and wails of dismay.

Just as I was about to cave in and get ice-cream, I noticed that both of my girls had become spellbound with Jamie’s storytelling.  Their frowns had turned to smiles and they’d quietly sat down with the other children.  The power of storytelling!

They listened intently and joined in with the story. There was a chorus of children repeating words and actions unprompted by Jamie.  It was a delight to watch.

We later dined on delicious BBQ Jerk children, rice & peas and curried goat – there were lots of tasty food stalls as part of the Tales of the Piped Piper Festival.

It was hard to keep track of our girls because there was so much for them to join in with and such a lovely wide space for them to run around in.  At first sight of Tooting Bec Common, my eldest exclaimed ‘this is one of the largest parks ever’.  They then began to kart-wheel through the vast open green space.

There were lots of arts and craft activities and their favourite was the Magical Wishing Tree where you could write down your wishes on a leaf and hang it on the tree and the ‘Dress a Teddy or Rat’ area where you could choose from a huge selection of beautiful fabrics and materials to dress your teddy or rat.  All run by Work and Play Scrapstore.

They even came home and carried on the crafting, making an entire family of teddies to tell stories with. Soon it was time for me to have a catch up with the other storytellers who would be telling trues stories live with me in the Storytelling Yurt.  We’d all attended a True Stories  storytelling workshop run by Jamie the weekend before.

He’d found a small secluded area on Tooting Common which was encircled by trees towering over us.  We considered telling our tales there outside in this new found magical enclave, but decided to stick to the intimate setting of the Yurt.

I was first up and telling a true tale of a memory in New York when I sparkled and glittered in a fabulous top I’d found in Greenwich Village.  The memory was triggered after finding the top hidden away in a dusty box in my loft, crammed against buggies, toys and 10 years of clutter!

Following on Jamie’s expert advice, I watched everyone’s faces as I told my story.  One lady sat with her hand on her face, gasping as I listed the items I’d found from my old partying days.  She looked so stunned that I felt compelled to say to everyone ‘I’m sure you’ve all had a black, full length, cotton cat-suit in your wardrobe at sometime?’

The experience of telling a true tale to adults, was slightly more nerve-wracking to me than re-telling a folk tale.  I couldn’t hide behind a legend or a character.  I was revealing a private, personal part of myself.  As Jamie would say ‘this was my gift to the audience’.